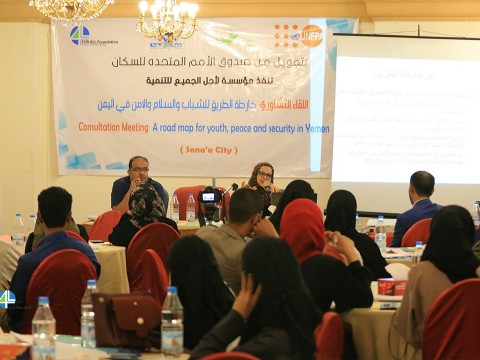 Within the framework of the project for the settlement of UN Security Council resolution 2250 on youth, peace and security, the Foundation for All for Development concluded the awareness sessions on resolution 2250 in seven governorates (Sana'a, Amanah, Aden, Lahj, Abyan, Dali, Marib) and funded by the United Nations Population Fund Definition of the resolution and its main themes and how to apply it on the ground. Youth groups and initiatives have been established to implement decision-making and to support the role of youth in the context of peace-building and decision-making. Where the positive role of youth and its impact on society has been made awareIn the peace industry and the prevention of violence in the community. This resolution also provides for five basic pillars that are mainly discussed (partnership, protection, prevention, participation, disengagement and reintegration). Participation, protection, conflict prevention, partnership promotion, and social reintegration Two sessions were held in each govern orate with a total of 14 sessions in the seven targeted govern orates. 420 young men and women aged 18-30 years were targeted in awareness sessions for the targeted youth. The sessions were interactive and the target was to create groups and initiatives in which a large number of people were educated in the community. Ongoing and ongoing awareness.